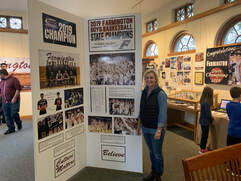 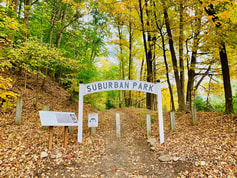 Click to Enlarge
A Stroll Through Suburban Park: Unionville's Hidden Gem
​Summer/Winter 2019
Built by the Hartford Suburban Railway, Suburban Park was in operation in Unionville from 1895 to 1905.  The electrified fountain which ran off the trolley company's power station was one of the first examples of electricity in use and was a novelty as everything else in the village was still lit by gas.  Near the end of the trolley line, it was a recreation destination for visitors from Farmington, West Hartford and Hartford.   This exhibit is the culmination of an Eagle Scout project conducted by Timothy Germano who rallied over 40 volunteers and led a huge effort to improve the park trails.  He also arranged for new markers containing information about the Park's history which were placed throughout the Park. 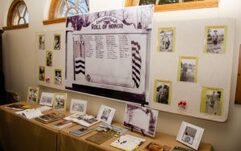 Click to Enlarge
Over There and  Back - Unionville  in WWI
Summer 2018
Our 80th exhibit explored the two years of the United States’ involvement in the “War to End all Wars”.  It ran through Armistice Day – November 11 – the date that marked the end of the First World War.  The centenary of the war led us to take a closer look at Unionville’s involvement.  Surprisingly, despite Unionville’s thriving business community, few of the manufacturers produced goods for the war.  On the other hand, all of them fully participated in local efforts to support the war through the sale of bonds and were instrumental in Unionville’s outstanding record for bond purchases as well as their donations to other war support organizations such as the Red Cross and the YMCA.

​The exhibit focused on two primary subjects – the Unionville men who fought and their community back home.  Men from Unionville began to volunteer for service early on.  Eventually  more than 100 of them became active members of the various services.  About half of them were deployed in Europe, mostly in France.  Three of these men were either killed in action or died ater of wounds received in battle.  One other, Harold Joyce, died in France, after the Armistice of the “Spanish Flu”.  Others were stationed in various military facilities in the U.S.  Some were members of the Navy and Naval Reserve. ​