History of our Building 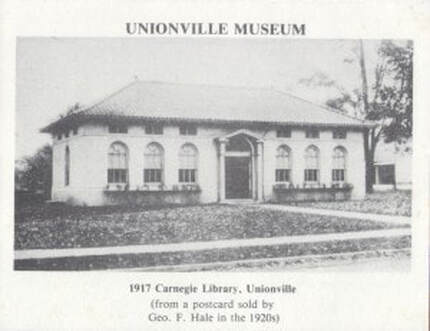 ​The Unionville Museum building was formerly Unionville’s West End Library Library and is one of 1,689 public libraries built across the nation in the late 19th and early 20th century with funding from the prominent Scottish-American industrialist Andrew Carnegie. Carnegie initiated a library construction grant program in 1892 which, after 1911, was administered by his Carnegie Corporation. Of the 10 Carnegie libraries remaining in CT the Unionville Museum building is regarded as being in the best condition.

Unionville’s single-story library building was constructed in 1917 with a Carnegie grant of $8,500. Both the architect and the builder were unique to the Carnegie program.  Architect Edward L. Tilton was a nationally renowned practitioner of library design and affiliated with a top, prestigious firm, McKim, Meade and White of NYC.

​Typically the architectural firms connected with Carnegie libraries were little known.  The builder, Richard Frederick Jones (1875-1951) was a home-town native of Unionville and regarded as one of the region’s foremost builders of the era.  His notable buildings included Hartford’s Bushnell Memorial Auditorium, the Bond Hotel, buildings at Connecticut’s Westover and Loomis-Chaffee schools, and Theodate Pope’s home in Farmington (now the Hill-Stead Museum).

The West End Library building has many features of McKim, Meade & White’s Renaissance Revival-style Boston Public Library (1895) albeit in a much smaller scale: its footprint a rectangle 44’ wide and 22’ deep.  The building’s 7-bay façade is comprised of 3 large ten-pane, double-hung round-arch windows flanking each side of a central entryway.  The original full-height round-arch entryway features double leaf oak doors beneath a fanlight transom. (Since the 1930s these doors have been fronted by a wood and glass portico.)  To provide additional light to the interior, paired sets of decoratively muntined, square clerestory windows top the double-hung windows on all sides.  A denticulated main cornice surrounds the building as a whole.  The hip roof is surfaced with terra-cotta Spanish tile; the rear pitch featuring a large twelve-paned skylight.  Eaves are embellished by exposed rafter ends.

The single-room interior retains almost all of its historic features including wall and ceiling plaster and varnished oak trim.  The original brick fireplace centered on the rear wall opposite the front door has a marble bas-relief panel showing a classically themed “Triumph” set in the brick above a simple oak mantle.

The museum building is architecturally significant as a well-preserved, diminutive example of the Renaissance Revival style typically used in the design of many village libraries across the nation at the time.  The surrounding village of Unionville has been listed on the State Register of Historic Places as an historic district since 1978, and the West End Library itself on the National Register of Historic Places since 1999.