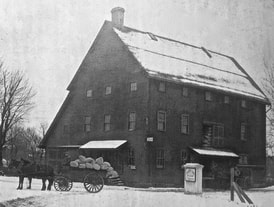 Click to Enlarge
Unionville’s history is the classic American story of adapting to change. Its geographic location was perfect for taking advantage of the major technological changes of the 1800’s. In 100 years, it grew from a sparsely populated agricultural area to a growing industrial village.

The Era of the Horse and Wagon
In 1721, the first settlers arrived at the northwest part of Farmington.  Farming was limited due to its rolling glacial soil, but by 1765 there was enough output to support Horsford’s grist mill and in 1800, Langdon’s saw and grist mill.  The first manufactured products came in 1790 from Hammond’s gun forge which supplied muskets for the War of 1812.  The mills were small since the horse and wagon transportation was slow and had breakage issues and limited capacity.  Better road quality created more business.  Improvements to the Litchfield Road led to the construction of a dam across the Farmington River that powered the Youngs family’s saw and grist mill in 1828.  This mill, located next to Riverview Miniature Golf, has a great history. ​ 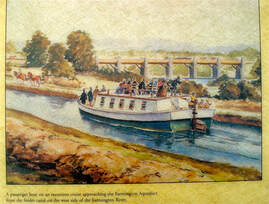 Click to Enlarge
The Canal Era
​In 1825 ground was broken for the Farmington Canal which was being built to give merchants an inland waterway to New Haven Harbor saving them the considerable expense of trading by way of the Connecticut River.  In 1827 a dam was built on the Farmington River, downstream from today’s Town Hall.  The dam was needed to raise the level of the river.  A three-mile-long feeder canal was then built to connect the river and the canal.

​This feeder canal did more than just provide water for the main canal.  It was constructed as a full-size transportation canal.  The long-term plan was for the feeder canal to continue west to the Erie Canal.  Though that plan was never realized by 1828, 70-foot-long barges were able to reach New Haven Harbor from the location of today’s South Main Street bridge.  In 1830, James and Augustus Cowles built a warehouse and wharf there to take advantage of canal traffic.  According to Cowles the completion of the canal "placed Unionville at the head of canal navigation on the Farmington River, and to that circumstance the modern village owes its birth".

The Farmington River Manufacturing Company was formed in 1830.  Its owners realized the potential for economic growth was huge if they could harness more water power from the Farmington River upstream from the 1827 dam.  This 1832 crib dam provided enough water power to begin the major industrial development of the area.  Ads were placed in the Hartford Courant that offered “valuable and extensive water privileges for sale or lease”.   The power canal on Roaring Brook also added to the growing industrial economy.  Due to its rapid growth in population, Unionville was made a postal district in 1834. 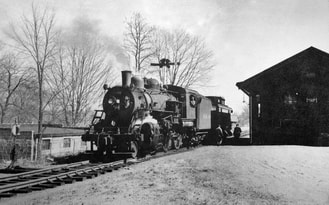 Click to Enlarge
The Era of the Railroad
​Canal transportation in  this area was replaced by the railroad in the late 1840's.  The railroad operated year-round with much larger roads and faster speeds.  The fact that it could be built and maintained a lot less expensively than the canal was also a factor as financial problems plagued the operation of the Farmington Canal from the start.  Unionville’s passenger and freight stations were built to service this rapidly expanding industrial community.  The railroad reached out to new markets for Unionville’s industries, increasing the demand for waterpower.

​In 1856, the new “Big Dam” with its power canal was completed a half mile upstream from the smaller 1832 dam.  By 1878, Unionville was a large industrial village.  There were 4 paper mills, with Platner & Porter being the largest.  There were also over 14 other new companies producing a wide variety of products including: machinery, hardware, tools, furniture, wood turnings, clocks, soap, candles, and musical instruments.  Some of the Upson Nut Company buildings are still here, preserved as the Upson Market Place on Mill Street.  New schools were needed.  Unionville High School opened in 1868, followed by the new junior high and grade schools.  In 1877 the Union Water Power Company was formed.  It later merged into the Hartford Electric Light and Power Company. 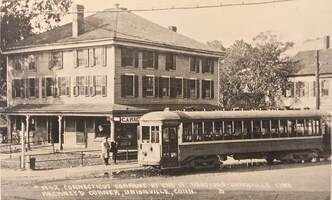 Click to Enlarge
The Era of Electricity
​In 1897 the trolley arrived, making use of Unionville’s new electric power source.  Suburban Park opened as a modern amusement park, attracting visitors from as far as Hartford.  The Village of Unionville now made up the majority of the town’s population and tax base.  In 1901, Farmington Village decided to take more control of their own affairs by incorporating as the Borough of Farmington in 1901.

A year later a new town hall was built in Unionville.  By 1903 the idea of completely splitting into two towns was proposed for Farmington but was rejected because both of the new towns would be too small to have representatives in the Connecticut General Assembly.  The result was an agreement to split the town offices and committees.  Town meetings would alternate between the two town halls.  In 1921, Unionville decided to incorporate as the Borough of Unionville.  Unionville Bank and Trust Company was founded the following year.
​The Modern Era
​The industrial economy of Unionville suffered major losses during the Great Depression of the 1930s and a major flood in 1938 caused great damage to what remained.  However, Unionville was able to improve its education during this difficult period by building a new town-wide high school in 1929 and replacing its elementary and middle schools with the new Union School, built in 1939, as one of Connecticut’s largest WPA projects.  During WWII, the town’s draft board was in Unionville, which made up the majority of citizens serving in active duty.  In 1947, the Borough of Farmington and Borough of Unionville were consolidated as the Town of Farmington and the form of government was changed to today’s council-manager model.

In 1955, Unionville was again ravaged by a major flood that had a huge impact, killing 13 people, destroying more than 100 houses and damaging much of what was left of its industries.  There was more change fifteen years later when a large redevelopment project restructured a good part of what remained of the center of Unionville and transformed it into the modern suburban village it is today.